← My latest updates and happenings Products In Real Life →

Diary of a painting – Those Magnificent Men

In the second post of my Diary of a painting series, where I pick a painting and explore its backstory and my reasons and motivations for painting it, I wanted to touch on a subject that has been a fascination of mine since I was a boy. Planes!

I live in Eastbourne in the beautiful county of East Sussex – seriously if you get the chance to visit the area, do so, it’s lovely – and every year for as long as I can remember The Red Arrows came to town. 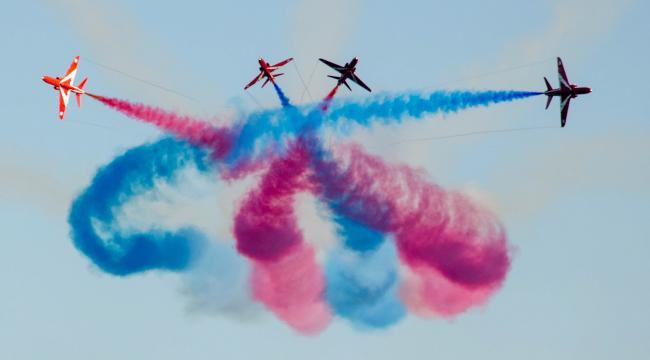 If you’re from the UK you’ll have heard of them, but if not they’re the RAF’s legendary aerobatic display team, roughly equivalent to the US’s Thunderbirds or Blue Angels. Every year they fascinated me with their skill and daring, seemingly passing within millimetres of each other, and creating amazing patterns in the sky with their multicoloured ‘smoke’. I swear one year one of them flew so low over the house that he nearly took the chimney off and I could see the whites of the pilot’s eyes! Of course, I was about 8 at the time, so my childhood imagination may have embellished this a tad. Suffice to say I was hooked on planes. I made so many Airfix models I lost count. I watched Top Gun more times than I care to remember. I had posters, books and trinkets. And I stood wide-eyed on a visit to the Fleet Air Arm museum while on holiday in Somerset.  I even applied to be a pilot in the RAF but was let down by my shockingly bad eyesight. 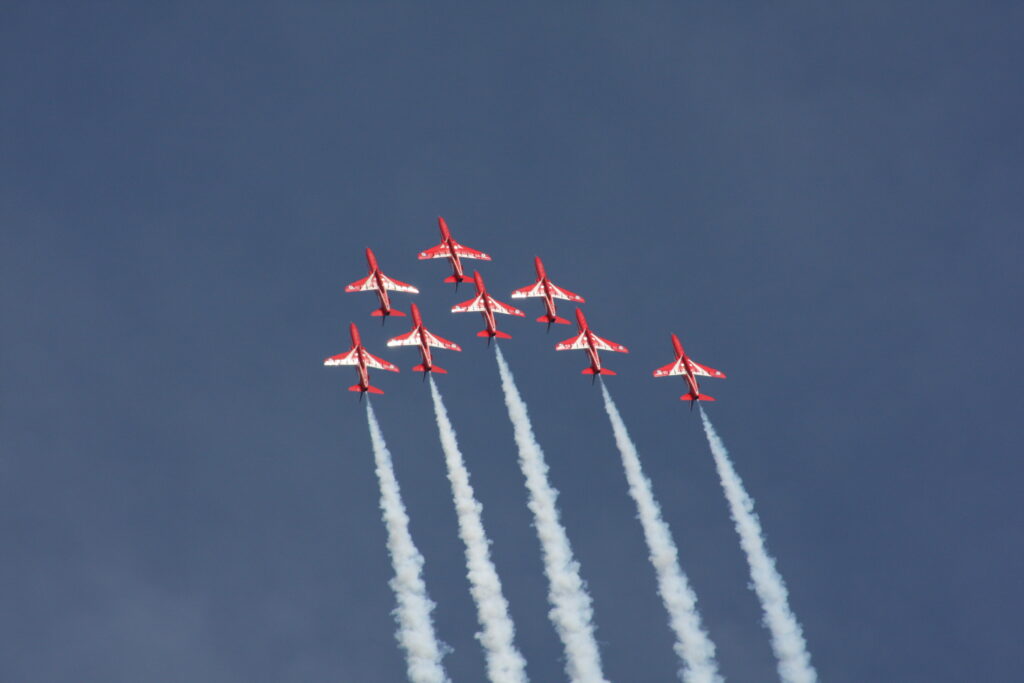 I literally have 100’s of photos of the Red Arrows and other planes that I’ve taken over the years. The vast majority on film (I’ve always been into photography). Every year they’d come, and every year I’d watch in awe.

Then, in the mid-’90s, the town decided to up its game and host a full on air show.  Eastbourne’s Airbourne was born. For a plane geek like me this was nectar from the Gods! It took place along Eastbourne’s seafront and, along with the Red Arrows, it had everything: parachute jumps, helicopter beech landing demonstrations, wing walking, countless fighter jets from around the world, aerobatics, historic WWII planes, even a 747 jumbojet! Ohh, that 747… Watching it come around the coastline, lower than the cliffs at Beachy Head was astounding. There were also plenty of bits on the ground to explore like various cockpits, flight sims and, of course, doughnuts!

There was always one thing missing for me though: the chance to stand next to and even touch the planes that we saw flying. As a consequence of its location, Airbourne was fundamentally restricted to an aerial show. Unlike airshows at, say, Farnborough, there was nowhere nearby for the planes to land. So it was all a case of you heard them coming, they did their bit, and they left. For me, the planes themselves are the basis for my fascination. After all, I didn’t have a poster of an F14 Tomcat on my wall because I liked the pattern of the clouds. Not being able to get up close and personal with the planes was a major downside and consequently, in recent years, I’ve not gone to Airbourne. Also, as a minor aside, as a local resident it’s always a pain the arse when the Airbourne ‘circus’ comes to town – traffic and parking, enough said.
Airbourne is still a thing though and, Covid years excluded, happens every year. In fact, 2022 will mark its 28th year, and I’m sure I will still look up in wonder as the Typhoon screams by overhead once more.

One thing Airbourne, and The Red Arrows, has done though is to help keep the plane geek spark alive within me. So, naturally, I like to paint them. 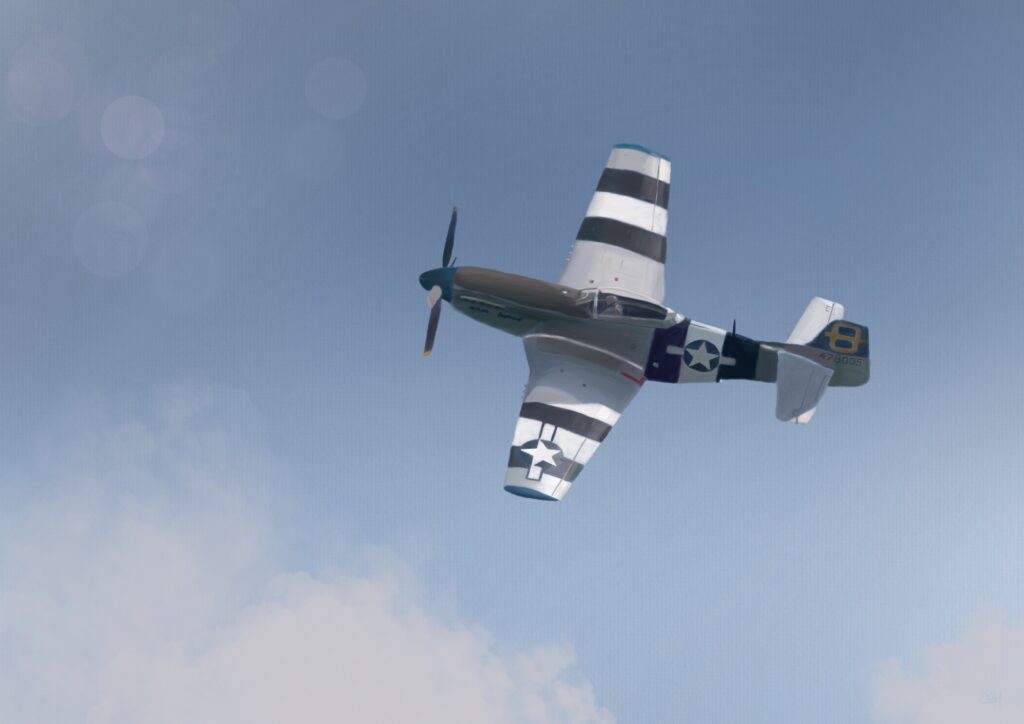 One of my favourite planes of all time is the P-51 Mustang. It’s an iconic American WWII era plane that is instantly recognisable by the awesome scream it makes when passing by.

Fun fact: The P-51 started out as being commissioned by the RAF! It was designed in the States to the RAF’s requirements. Some iterations of it even shared the Merlin engine from the Spitfire.

Fun fact number 2: The source of the P-51’s iconic scream has been hotly debated over the years. Many believed that it was the engine’s supercharger. But it’s now considered to be caused by air rushing over the plane’s gun ports located along the leading edge of each wing. Basically the same effect as blowing over the top of a bottle.
Whatever causes it, it’s very cool!

The P-51 has also featured in many a movie, including Saving Private Ryan and, as my personal favourite P-51 moment, Empire of the Sun.

As for the painting itself, it’s based on a photo I took one year at Airbourne (see, all that waffling was leading somewhere!), It was one of those rare occasions when everything – like the position of the plane, the lighting, and the sky – just worked. I really didn’t need to change or ‘enhance’ very much for the painting, aside from a little compositional shift and some artistic licence with a few of the details.
I painted it mostly in oils, with washes for the sky. It didn’t take that long to paint either and was definitely what I like to call a “zone” painting. I was completely wrapped up in the painting process. It just flowed. It was only me and the painting, and everything else just faded away. I live for those moments, it’s all very zen! I still look at the painting and wonder how I did it.

If you’re interested, you can see it all come together in the time-lapse video:

I hope you found the backstory of this particular painting interesting. I have more plane paintings planned. In fact, I’m currently working on one of a Eurofighter Typhoon: 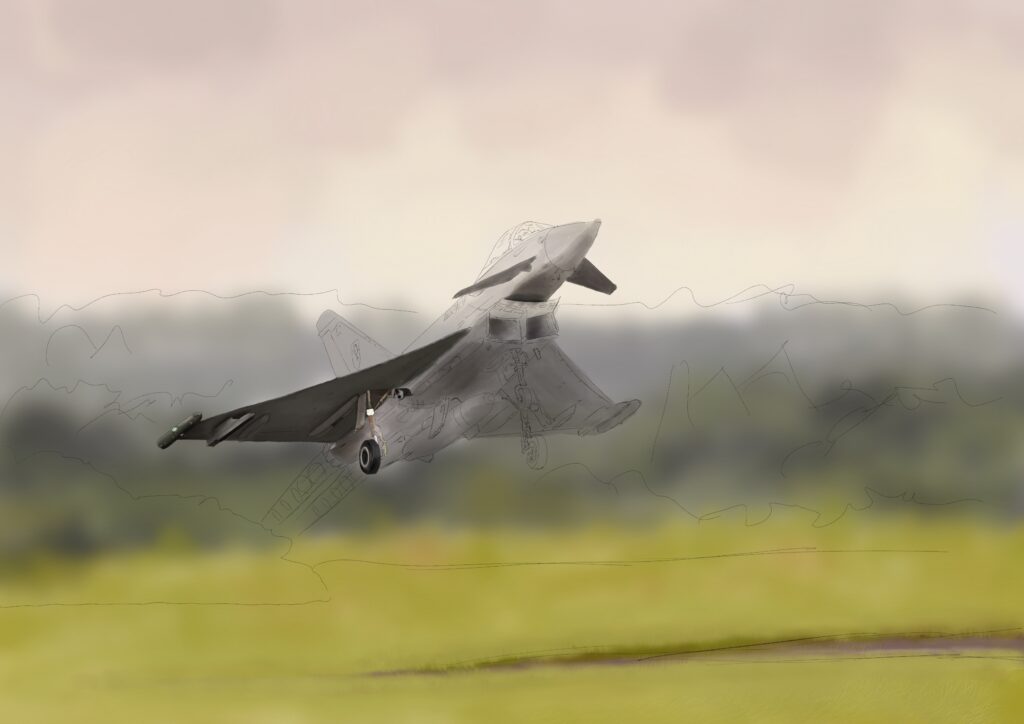 Obviously, it’s not quite finished yet, but subscribe to my Newsletter to be the first to know when it’s complete.

Thanks for reading and all the best,
J

Those Magnificent Men is available to purchase as a canvas, greeting card, or framed and unframed print from my shop

Justin is the owner of The Curious Creative. Besides painting he also enjoys going for nice walks with his dog, photography, music, food, movies, and a bit more food. He's also an uber nerd and loves anything to do with tech. Currently he's trying to seek help for a nasty Microsoft Flight Sim 2020 addiction.

This site uses Akismet to reduce spam. Learn how your comment data is processed.

← My latest updates and happenings Products In Real Life →